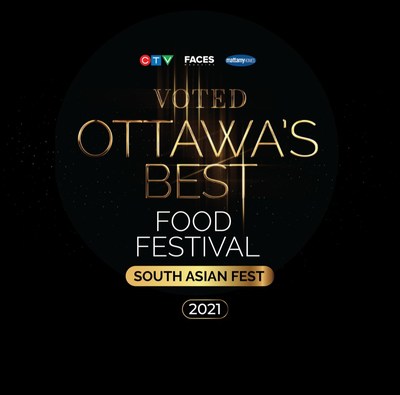 OTTAWA, ON, March 1, 2021 /CNW/ - The Ontario South Asian Community Association's (OSACA) annual showcase event, the South Asian Festival (www.southasianfest.net) won the 2021 Ottawa Award for the Best Food Event and Festival. The largest such festival in North America to celebrate the cultural heritage of the south Asian region, it won against 18 other finalists in this category.

Nominated for and voted online by the general public, the awards are presented by Faces Magazine, an Ottawa-based premium lifestyle print and online publication. This was the 11th annual Ottawa Awards to recognise accomplished businesses and individuals across 300 categories in Canada's capital city.

Financial support was also provided by the Government of Canada's Department of Canadian Heritage via its Multiculturalism program, Ontario Ministry of Tourism, Culture and Sport through its Celebrate Ontario 2019 program and Ontario Cultural Attractions Fund (OCAF), Human Concern International, the City of Ottawa and the Rangar family.

"This is another feather in SAF's cap," said OSACA's Director Bundeep Singh Rangar. "One more tribute to my brother Huns's vision and tenacity as well as the countless hours of hard work put in by his friends and scores of volunteers to make it an annual summertime success."

The South Asian Fest (SAF) was started by Bundeep's brother, Hunsdeep (Huns) Singh Rangar about 13 years ago. Very tragically, he passed away in June 2019 leaving the family and community with an unfillable void. Hunsdeep received the Canadian Ethnic Media Association (CEMA)'s radio category award at its 41st anniversary awards in 2019.

Bundeep took over his activities and responsibilities, including the running of the South Asian Festival, in Aug. 2019, as Director of OSACA, the driving force behind the SAF.

The SAF was supported by the Ottawa's south Asian community to honour Huns and fulfil the desire of his family and friends to maintain his legacy. A signature radio program Huns had started nearly 20 years ago, is also being continued by his mother Vinnie and Bundeep. It was rebranded from Mirch Masala Radio to Radio Huns (www.radiohuns.ca) in August 2020 to commemorate Huns's birthday. It airs online and on CHIN 97.9 FM radio in Ottawa every Monday – Saturday, from 5pm – 8pm EST.

Some notable attendees of the 2019 SAF event included the Hon. Lisa MacLeod, Ontario's Minister of Tourism, Culture and Sport; Hon. Jim Watson, the Mayor of Ottawa, former Minister of Employment and Social Development Mr. Pierre Poilievre, the former Minister of State for Multiculturalism Mr. Tim Uppal and Ontario's Associate Minister of Small Business and Red Tape Reduction, the Hon. Prabmeet Singh Sarkaria. His Excellency Vikas Swarup, the then High Commissioner of India to Canada hoisted the Indian flag on the last day of the festival, which coincided with India's Independence Day.

The 10-day event was supported by the Indo Canada Chamber of Commerce, the India Canada Association and Cistel Technology among other organisations and companies. The event was cancelled in 2020 due to COVID restrictions.

The Ontario South Asian Community Association (OSACA) was founded in 2009 as an Ottawa-based, Not-for-Profit Corporation with a mandate to promote Cultural Awareness through an Annual Event showcasing South Asian Talent in the National Capital Region targeted towards the Canadian Mainstream.